We love to work with Brandon, because he does a very good job in the technical implementation. He delivers custom work, which is why we like to place beautiful custom made designs with him! 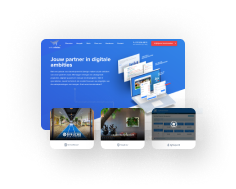